Are you waiting for something?

Yes I know. I have not blogged in a while. I had my reasons though. First of all, I find that others are waiting for something. I have nothing to provide. I am not interesting. I was borderline suicidal a couple months ago, and I became someone I hate, but I tried to compose my self. Patience is something I value the most, and it helped me through a lot.

What I have become, and it will take me months to slow down from, if ever, that my verbal communications are without limits. I understand people, and I am not afraid to say what is on my mind. I don’t regret anything, and I stand with my point of view 100%. I am not ashamed of anything or think twice. I have endured so much crap in my life, especially the past two years, that my sanity was jeopordized at some points, and now, well, I have become “this”.

I will get back to my first point. I am constantly being watched. Either by my psedonym that I tried to flourish since 2005, or the name I was born with. I don’t get it. Why me? What is so interesting about me? What do I say, or portray about my self that is so interesting? It’s not. I am a very boring 32 year old. I am alone with my thoughts. I work very hard at anything I do, and I show it with my talents. I am very blunt and I stand with my opinions.

Enough of that. I am enjoying my new job. It is interesting and very mellow. I needed that because I wanted to step back a little bit. I get paid a lot, and I don’t do anything that requires that much energy or thinking of various solutions as I did in the past. I am focused on one thing, and that is it. So what did I do so far? I work really fast, and I need to slow down. Hmm, I portray my creative talents, and I love that. Oh, and I made one guy almost cry and walk out. I had to stop him at the door and calm him down. He apologized to me the next day, and realized who he is dealing with. He tried to justify my actions personally, but what was there to discuss? He is he, and I am me. Isn’t that nice? Oh well, sometimes you have to be your self to fit in. Or some people like a challenge. No? Hehe!!!

How to be an Arab?

Lately, I have been getting a lot of people searching on Google to come to my site asking, “How to be an Arab?”

It is a lovely question. It makes me wonder what is an Arab.. no wait, how can one become part of another culture, or is part of the same culture, but does not know the culture? I am confused, because I would never think how to become identified to others by my culture and traditions. 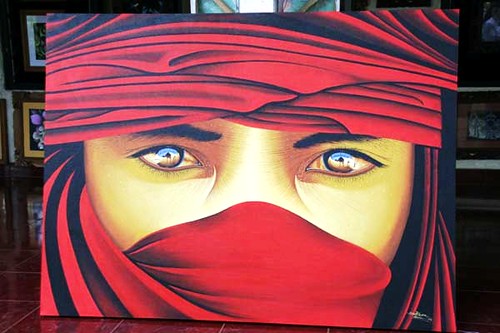 Let’s simplify it then. How to become an Arab? Ask your self these points:

1. Do you have at least one parent of Arab blood that drive you crazy? Two is a bonus!
2. Do your parents force you to live by the Arab culture?
3. Are you olive skinned?
4. Do you secretly love the desert atmosphere?
5. Do you have to hear long lectures from your parents that start and end with religion?
6. Do they throw hell and the after life in there every now and then?
7. Do you speak loudly every where?

I totally forgot to post yesterday!! It was kiss me I am Arab day! March 16.. see what happens when you are enjoying your life??

Yesterday is Kiss Me I am Arab day. I declared it as another hallmark holiday because you know, we can’t get enough of those!!

This is its 5th year in a row!

Enjoy it, and blow kisses to an Arab, they really need it with such chaos they are living at back home.

The world around you is joyous!

Oh what should I write today? I don’t know. I am very quiet these days and I just go to work, and then back home. It is so cold or rainy to do anything. I want spring to come. I want to smell the roses and walk under the sun.

Anyways, nothing new with me. No one is bugging me from my old job. Some say they miss me, but I don’t believe them. I think they wanted me to leave and said, “Good riddance.” I said, “Woopi!! I am out of there! Never going back to that awful place.” Two face backstabbing losers. I have never seen in my life such people. Maybe it was the age issue, or lack of communication and empty talk. Who knows!

I have not been doing anything productive. I have not returned tol my old self yey. I am trying slowly. I miss the old bubbly positive me. I took life lightly and enjoyed it. I aim to return to what I was. Yeah! That is my mission for the next few weeks!

All of you know that I am happy beyond belief. My new work place are all young adults, like me and all University grads. Well most of them! He he! Not only that, but they all eat lunch together, and on Fridays, they pick a random resturaunt that they can walk to and eat out! MY GOD! I miss being social and going out. It will take me time to recover, but wohoo, I love this job!

Wow, I have never been excited in my life. I chose a place to work at and not take the first thing because I was desperate for it.

Well, for my previous job, my sister called me a bitch for what I did. She said it with a smile by the way, and we celebrated with a cake! A yummy delicious cake that I was free! Free to do what I want! This week, my old co-workers, well two of them only that I didn’t directly work with, emailed me to congratulate me on the new job. I love LinkedIn and Facebook by the way. Just update the status, and feel the love!!!

One former co-worker didn’t answer my question regarding the software and how things changed. Knowing me and how evil I really am sometimes, and what I did by leaving all of a sudden, made me think that it is about time they close that part of the company. Software and them was going down hill, and they were squeezing every bit of skills I had and so depended on me. I was border line insane. Never in my life I have seen people change their mind every day, and the bosses, husband and wife, couldn’t agree on anything. I was in the middle of it all. Not only that, but my woman boss decided a year and a half ago that it was too cold to live here, and one of the most expensive cities in the states was better to live at. She communicated with me via email or phone. Her husband drove us insane the weeks he was up here in Canada. She might as well make the company American, and hire American programmers. Oh wait, no, Canadian young programmers are way cheaper!

There are more shocking stories by the way. Like the time we were told that there wasn’t enough money to pay our salaries (a threat), but a week later the boss was talking how he bought a Porche and a Harley down in the States. Also, full time people if they get sick, their salary gets deducted for missed days. Is that wrong?? I went to work sick because I need the small fortune! (Whatever!)

Anyways, enough of the past. Now I know what I like and not like. I want to be comfortable where I am 40 hours a week. Is that too much to ask?

If you can count your money, you don’t have a billion dollars. — J. Paul Getty